Starting from the west side of the city, following the Union Canal and heading through Bruntsfield Links, a public golf course which is the second oldest golf course in the world, situated in one of the most popular and well known areas of the city.

Following the route we are passing through the Meadows Park (the main park of the city centre) to reach the famous dormant volcano, Arthur’s Seat, which from his majesty is watching the city from above.

We’ll do the 360° loop of the site and then reach the “Secret Garden” (Duddingston Village) where we’ll stop for a wee brake just beside the magnificent Duddingston Loch, surrounded by the ancient village that was settled in the 14th century. After the “pit stop” Ricky is going to take you back to the Old Town through the famous “Innocent Railway Path”.

You want to discover Edinburgh and it’s surroundings or specific areas of Scotland in your own way?

You want to adapt the program to your needs?

Our know-how allows us to study and enrich your request for your exclusive customized bike trip.

Some of our Previous Tours

These fun and sporty ride tours offer opportunities for off-bike access to historical sites, special events, roads and bike paths of the city centre. A different way of sightseeing of Edinburgh, recommended for everyone! 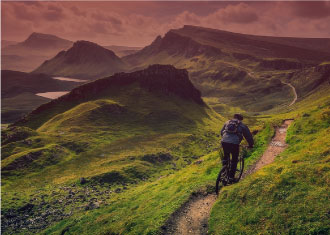 Scotland is one of the best mountain bike playgrounds you’ve ever seen. This end of the UK is teeming with high singletrack race, forests, valleys, unforgettable lakes and meadows.

What are you waiting for? 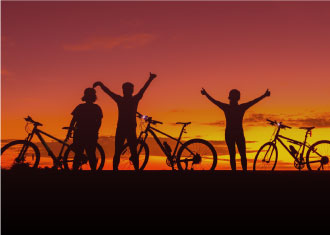 The Adventure bike tour is about experiencing the best riding that Scotland has to offer. Challenging routes and some of the best landscape you can discover.
We have researched only the most exciting cycle routes for a trip you’ll never forget!